The simplicity of HCI and the flexibility of converged

HPE have introduced into their portfolio a new product proposition called HPE Nimble Storage dHCI, which still follows the same principles and appeal as HCI, but allows you to scale compute and storage independently of each other, rather than both at the same time. This has been a key gripe of the HCI architecture as many deployments can only scale compute and storage simultaneously rather than the individual resource.

HPE Nimble Storage dHCI breaks down into a Nimble storage array paired with HPE’s infamous ProLiant servers and a pair of switches.  The solution is managed by InfoSight, HPE’s cloud-based predictive analytics management tool and exclusively gives enterprises effortless management with the performance, resiliency and efficiency needed for business-critical apps. Another compelling attribute is that dHCI allows you to re-purpose your existing DL Gen9/10 servers, by adding a new Nimble array, pair that with VMware and voila- you have created a dHCI solution without a full greenfield deployment. 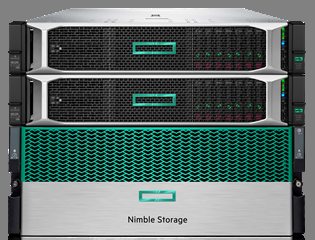 So is this just a deconstructed apple crumble for the modern-day IT boffins, or does this really have a place in the vastly growing IT marketplace? Hopefully this brief discussion will give some insight on what dHCI is, where and how this is relevant in the market.

Let’s start off with the differences between HCI and dHCI:

HCI is very much a building block game. Once you have chosen your block, scaling of each resource must be a joint venture, scaling both compute and storage at the same time. This obviously doesn’t help when you only want to add compute and no storage and visa-versa but allows for a relatively simple upgrade path. When you need more, just add a new block and away you go.

On the other hand, dHCI lets you scale compute and storage more independently of each other. This solves the issue of purchasing resource you do not require and facilitates the unpredictable growth of infrastructure resources, as we all know that having predictable growth in the data centre is more the dream than reality.

dHCI is aimed at IT managers who want the simplicity of HCI and the flexibility of converged. dHCI is simple to deploy, manage, scale and support. It is software defined so compute and storage are condensed and managed through vCenter with full stack intelligence from storage to VMs and policy-based automation for virtual environments is integrated throughout.

Want to know if dHCI is right for you? Read more below: